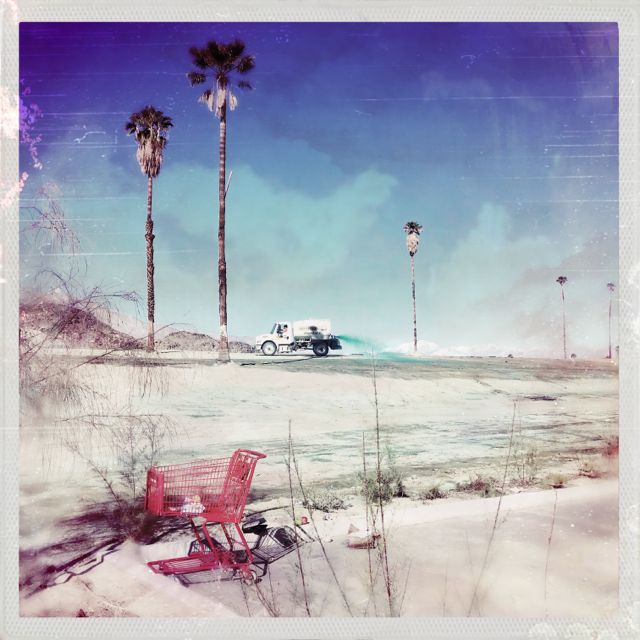 Yesterday was a moment photographers dream of. A combination of elements came together creating a fascinating and unforgettable image. Over time I will share the stories behind some of these shots as they occur, honoring the Muse’s influence in setting up a scene that offered more than we ever could have imagined.

The morning began with a visit to the car dealership to check out a mysterious leak. The area is filled with other auto showrooms and has an odd, fake feeling to it with all the shiny cars, bright balloons, and banners offering $8,000 off MSRP. My adventurer always wants to check out new locations, so I went roaming around looking for interesting iPhone image adventure possibilities. Following my instincts, I was drawn toward the rocky hills behind the showrooms. I hoped to climb up into them, but when I got behind the Volvo dealership I saw a strange sight. There was a vast open area that had a sickly green tint to the earth with a few palm trees punctuating the open expanse. The green was actually a lovely tone and the Hipstamatic iOS photography app loves to pick up interesting colors so I moved closer to see if a good shot would reveal itself. Hipstamatic had just released the new Manchester Hipstapak that morning and it was loaded in my favorites to try out this new option.

When I crested a small hill I was startled by the image before me. Below the lime green hills on the edge of a parking lot was a bright red shopping cart. To say the combination was intense does not do it justice. Jolting, compelling, arresting, or stunning may come closer to the visceral response my psyche had. We had hit the photo jackpot with the colors and contrasts, lines and perspectives that had a high probability of making some incredible images. I got to work using the new Manchester combination and was again thrilled because the distressed Hipstamatic options are my favorites. Manchester reminds me of the Hongdae Pak with its washed-out, light-leaked, scratchy beauty. The images look as if they got lost in the musty family basement for thirty-years and we are now recovering these lost gems.

After taking some extremely satisfying single and double exposure photos I decided to do a Periscope broadcast (video here of the LIVE happening) offering an experimental photography tutorial on this surreal desert still life. I launched into the scope and was chatting away about finding those holy juxtapositions when I saw a truck coming over the green hill. I got so excited on the scope saying this wonderful set-up just got even better. Then the real miracle occurred. The truck was actually spraying the bright green chemical to control the sand in that very moment. Never in a million years could I have dreamed of having the green truck there at the same time, in the bright sunshine, with the perfect Hipstamatic combination at a wonderful angle with the hills, and the sky, and the palms, and the fire engine red cart.

This really was one of those divine interventions from the photo gods. I finished the scope and furiously took a series of images including the one above. I bounced back and forth between single and double exposures and followed the truck’s movement around the open field. Amazingly the green substance did not have a terrible chemical odor. After a great round of images and feeling the truck driver’s anxiety about my documentation of his work I wandered back down to the car lots. I thought he was done spraying for the day and was grateful for what has already been captured, but then twenty minutes later I caught him again at another angle and got some more shots. This was truly one of those larger than life days when the hidden magic revealed itself in full form.

8-24-16 UPDATE: I just learned that this photo called “Greeting From Palm Springs” will be part of The Palm Springs Art Museum’s Artist’s Council Show opening October 1st, 2016! So honored and thrilled, it really is an archetypal image of this area and is part of my evolving Disintegrating Mirages series in this bizarre place that is both decadent and deeply earthy and spiritual (not that those two things cannot be decadent….) It is just so odd to see Bentleys EVERYWHERE.

10-29-16 UPDATE: The image won the Peggy Vermeer Award for Excellence at this years ACE Artists Council Awards Ceremony at the Palm Springs Art Museum. Read about it here. So honored.

*Keepin’ it real it was Cathedral City for those who actually know where that is.